The Lives of Lizzie & Abby 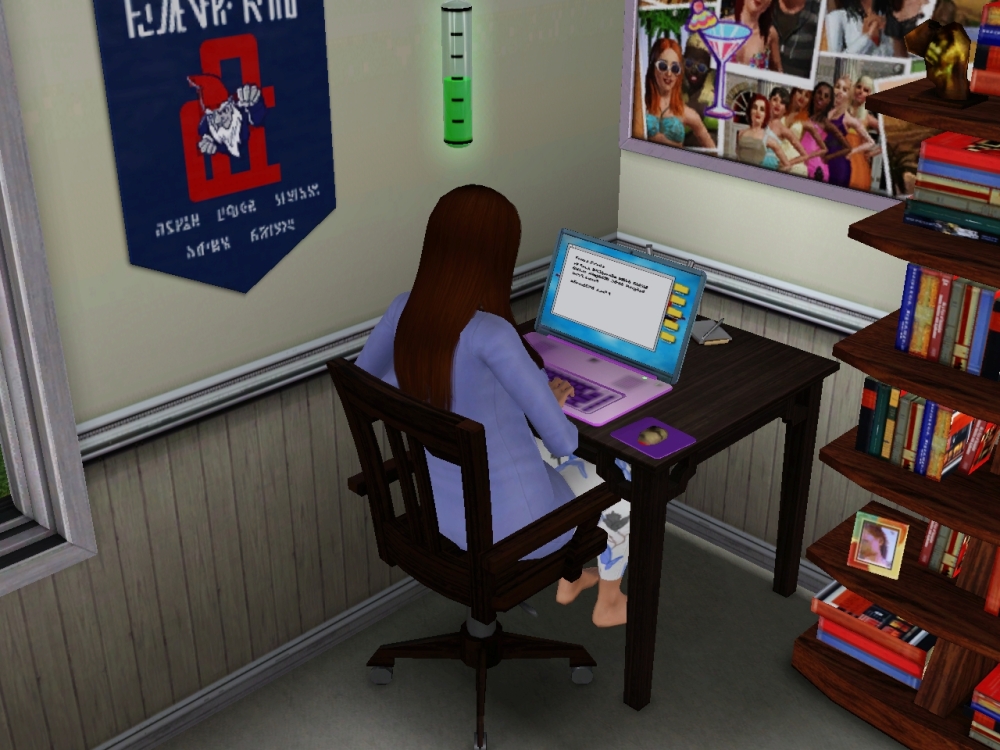 It takes everything for me to drive back to school Sunday night after Thanksgiving. I was having such an enjoyable time with my mom, dad and Judy, that it was hard to tear myself away. However, I tell myself not to worry, but that in just three and a half weeks, I’ll be back again. That at least keeps me sane on my drive back to school. It’s amazing how my one communications professor has actually made me dread coming back to school. That is so not me at all. It’s more of Abby. While we were in high school, I was the one that always had to motivate her to get more into school. Now it was her that kept telling me that I will be back home before I know it. Freaky or what?

I spend the next week typing as much of the Beta Gamma Kappa guidebook as I can. I am hoping to be done with it by the end of next week, but we will have to see. I still can’t believe I have gotten myself into this. Me, of all people, was going to be a sorority girl member. The things one does for friends. I just hope this doesn’t come back to bite me in the end. 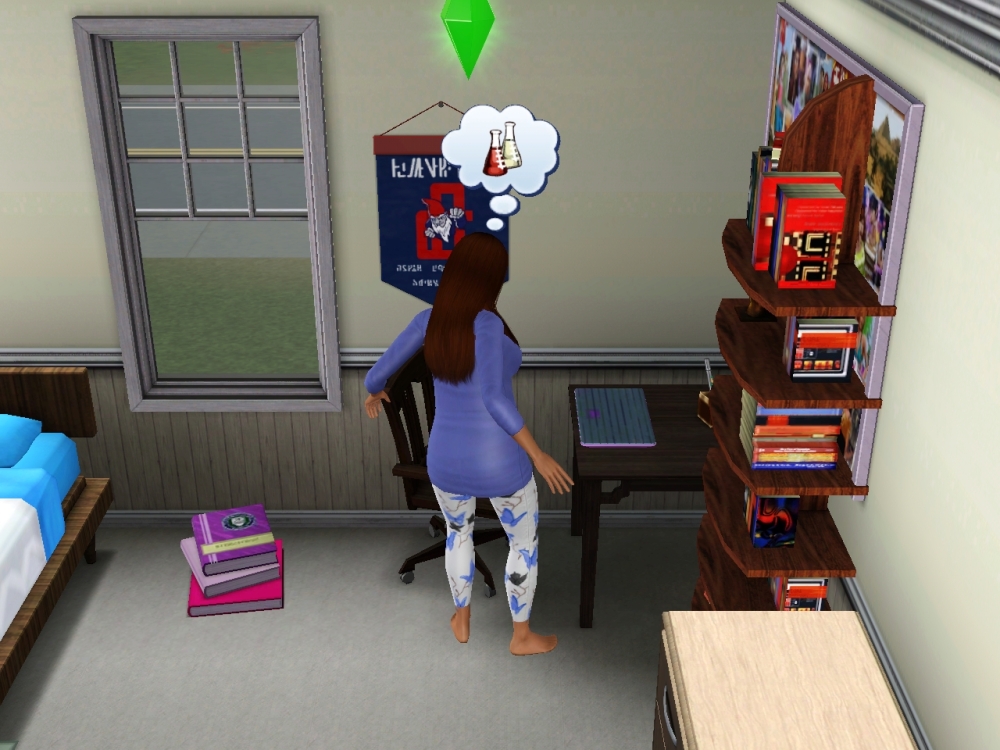 As I am typing Tuesday morning, I get a text from Abby. Fortunately for me, my communication professor cancelled class for the day, so I don’t have class until later. I glance at my phone and read her message:

-Hey Liz! Could you come meet me at this address? I have to show you something! It’s a surprise!

I am a bit on guard, but I decide to check it out. After all, I am a bit curious. What is Abby up too?

I turn off my laptop, then take a shower and get dressed. 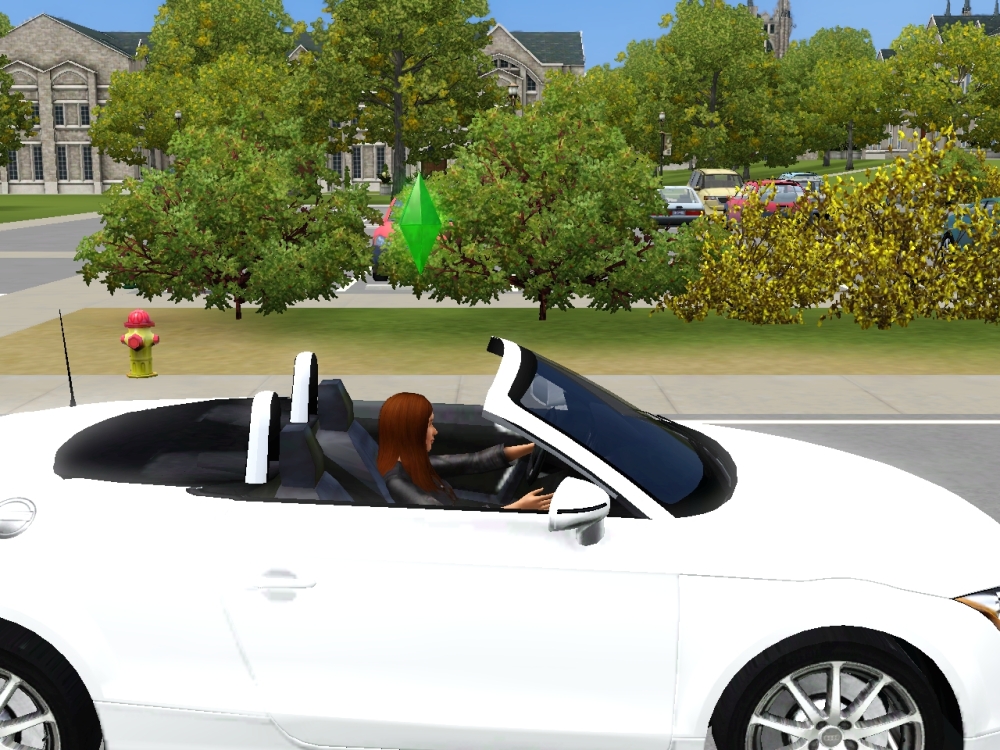 It’s a quiet drive over to the address Abby texted me. “Into The Rush,” by Aly & AJ is playing softly from my radio. I haven’t heard that song in ages. I definitely love when the radio plays throwbacks. 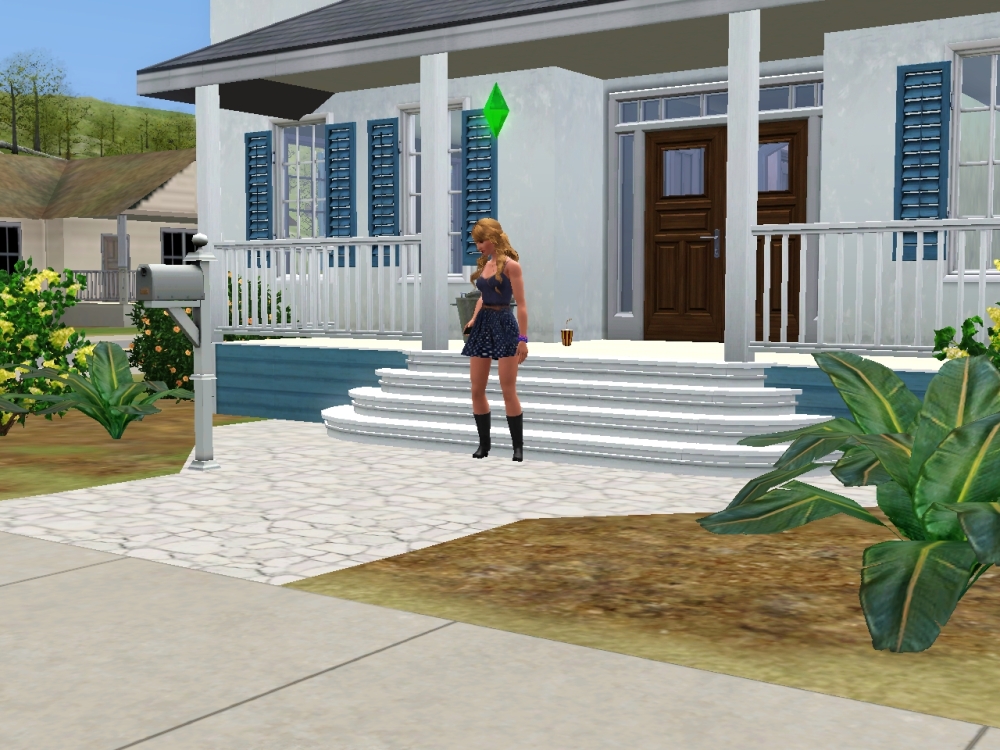 As I pull up slowly to the house number, I am relieved to see Abby standing in front of the house. I know that it was her number, but when she said to just come to the texted address, I started to feel like I was in one of those creepy thriller movies. Spotting me, Abby starts smiling and waving me over. I turn off my car engine and slip outside. 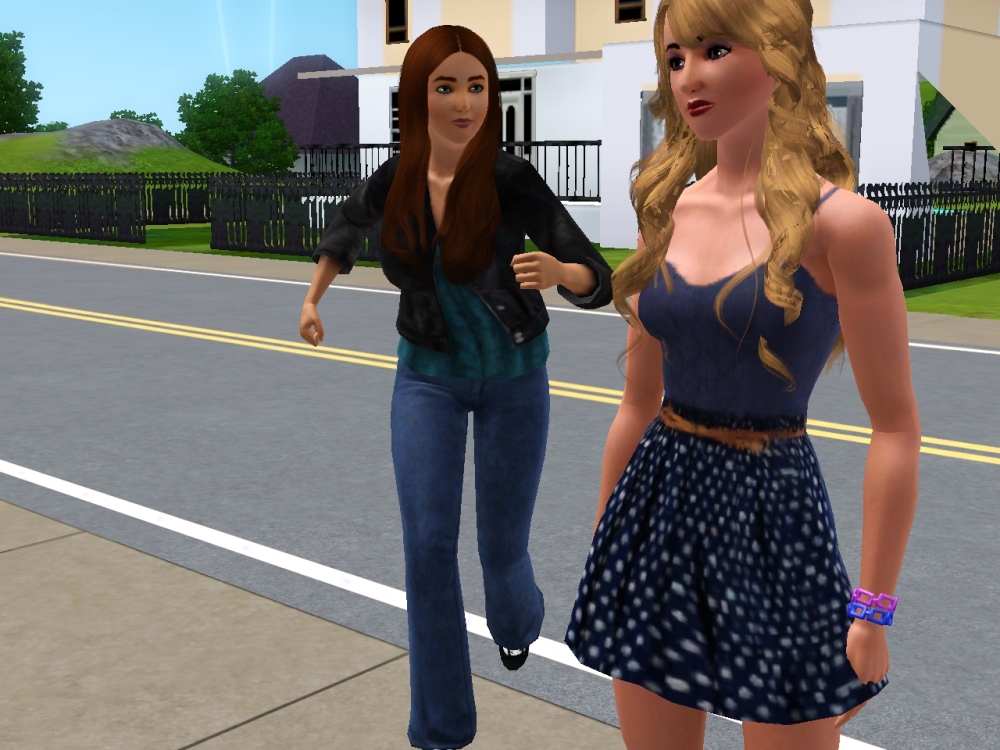 Abby grins. “I give you the Beta Gamma Kappa sorority house.”

“Okay, okay. I know it’s a bit early, but I found this place last week when I was driving by and I think it would be perfect for the sorority.”

“I know it needs some work, but I think once it is all fixed up, it will be a great place for our sorority sisters. What do you think?” 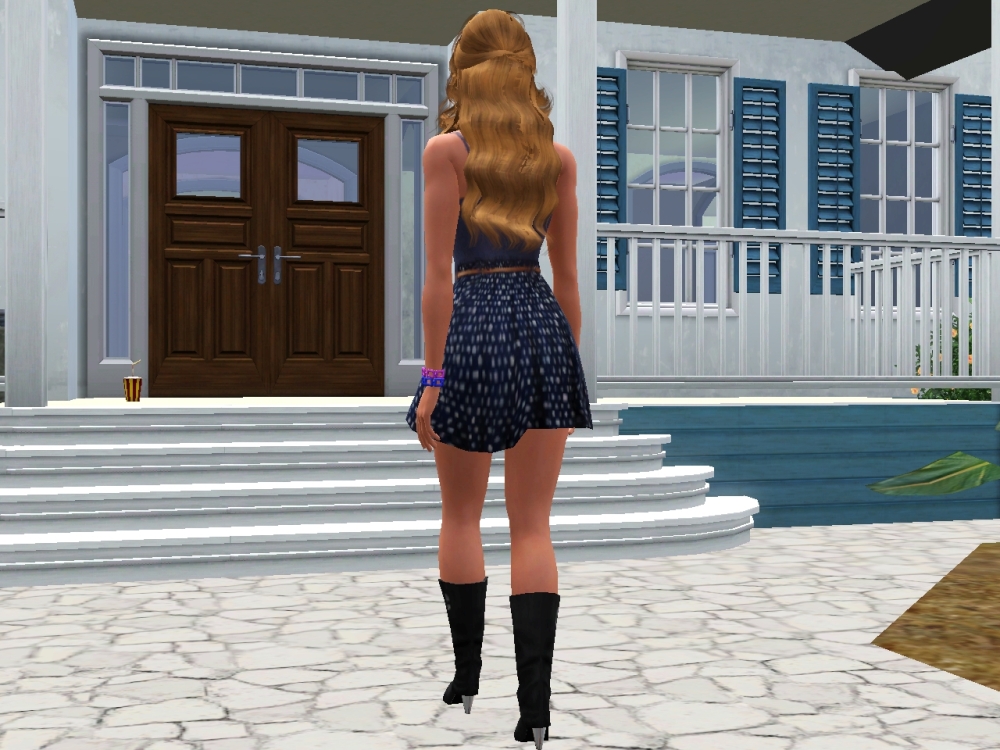 I am a bit speechless. It was a bit soon to be looking for sorority houses, but even I couldn’t deny that the place had some serious potential. I could just picture the house filled with laughing sorority girls. Wait, what am I saying!

“I know, I know,” Abby says, cutting me off. She walks ahead of me to the staircase to examine the house some more. “I really do think that this will be perfect. I want to claim it before someone else does. I’ve looked into it and it will take quite a bit of funding to have enough to fix it up.” She then smiles. “Good thing Charls is going to help us with that.”

“There is a Greek Gala event coming up in a week. Its use is to raise money for the university, along with money for all the Greek fraternities and sororities. Well, I was talking to Charls and he said that he might be able to have some of the Greek donation money come to Beta Gamma Kappa!”

“It sure is. I still can’t believe the Gala is already next Friday. I can’t wait!” 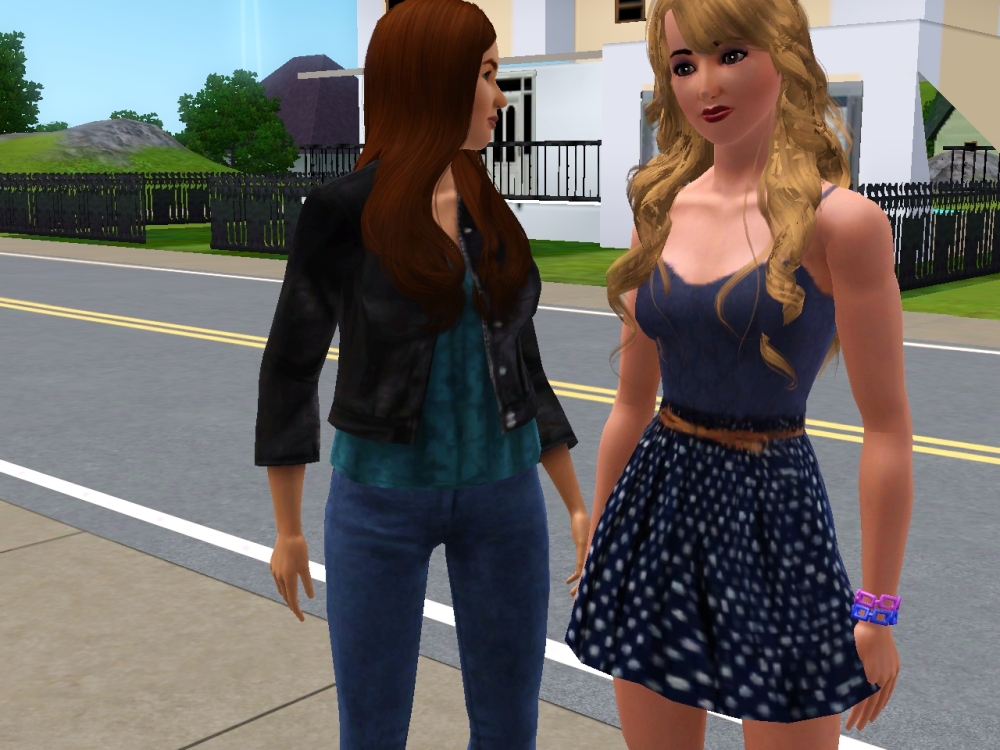 I then check my cell phone. It is almost time for my next class.

“I should head off. My next class is starting.”

Abby nods. “Yah, my art class is starting in an hour. Meet up later in the dining hall?”

I nod. “Agreed.” I then hop into my car and drive off. 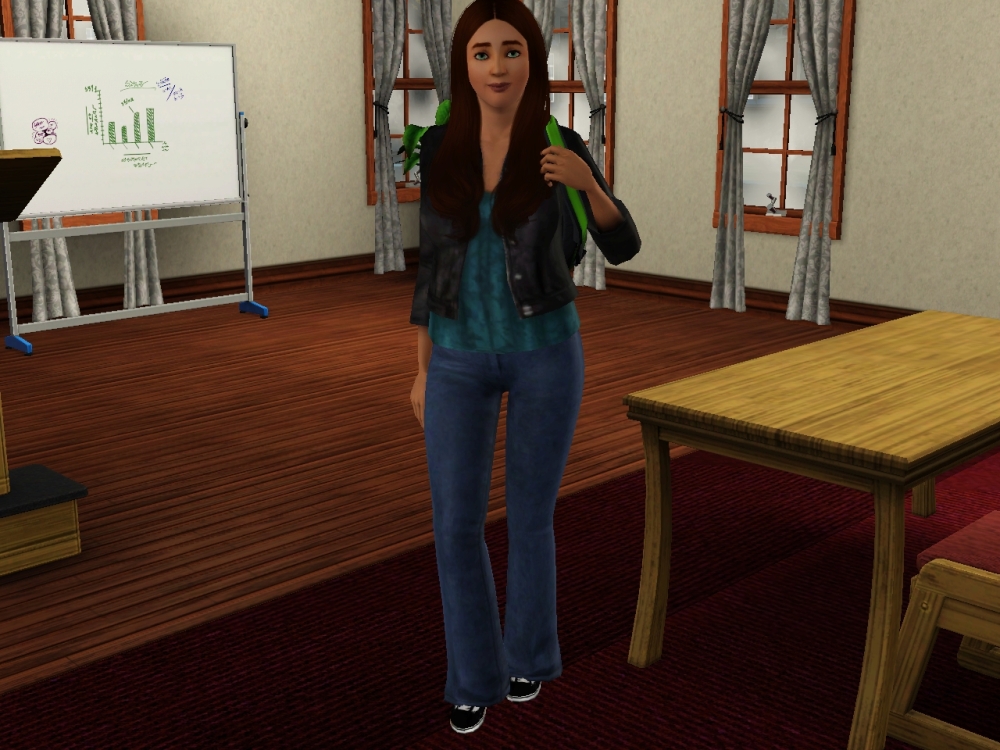 My Psych class ends up running a bit late, so by the time I get out, it is getting dark. The fun of winter weather. I sweep my things into my backpack and head for the dining hall. I am starving and am strangely in the mood for sushi again. 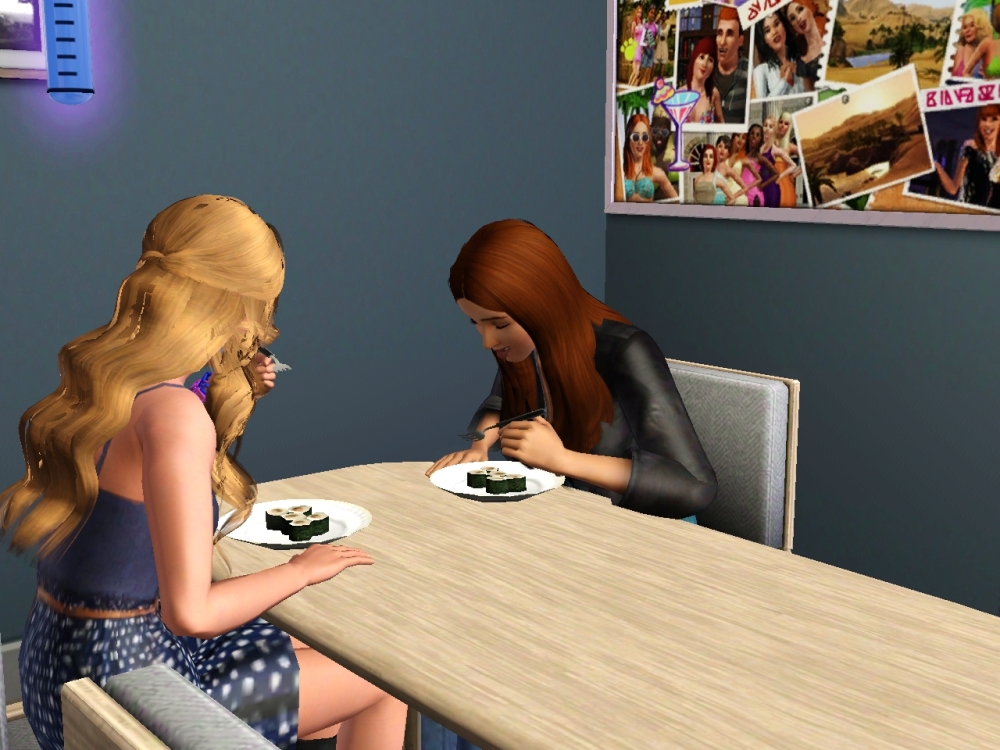 By the time I reach the dining hall, Abby is already seated, picking at a plate of sushi. I grab a plate for myself and then join her at her table.

“Hey roomie! How are you?” I then pause seeing the expression on her face. She looks extremely upset. “Hey, what’s going on?”

Abby sighs deeply. “We aren’t getting the funding.”

“Charls texted me an hour ago to say that the Greek council has said that all of the donations will go strictly to already established sororities and fraternities. But that’s not all. The council is also not allowing anyone who is not already in an official Greek sorority or fraternity, to recruit members there.” Abby exhales angrily. “It’s crazy! It’s as if they already knew what we were trying to do! Even Kimberly thinks it’s weird.” 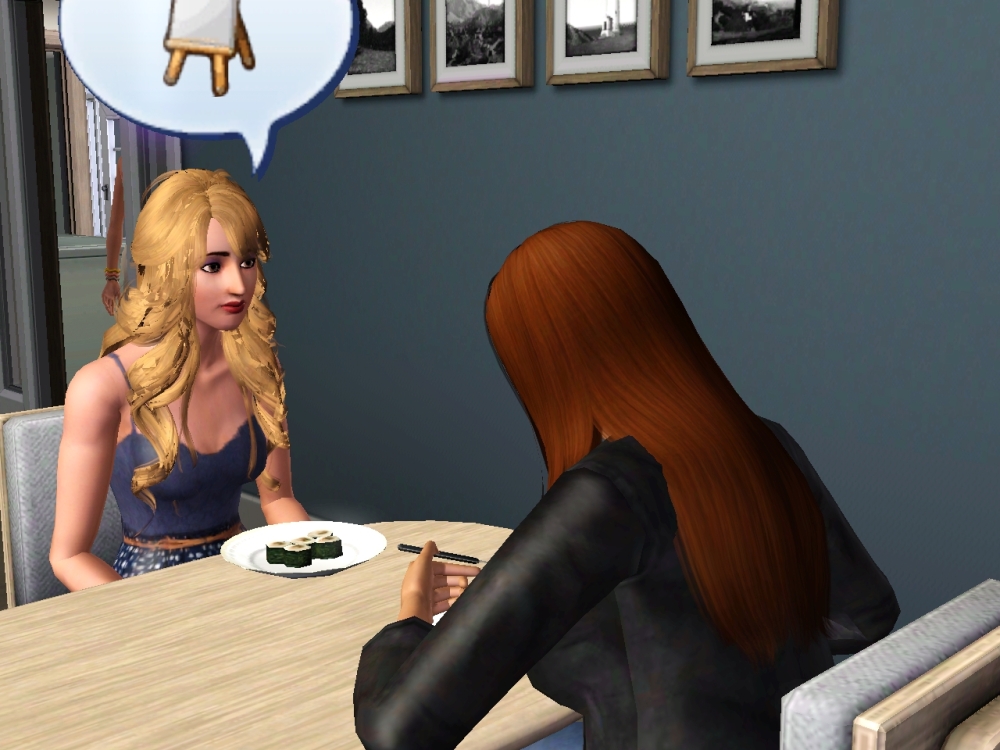 “Geez, I’m sorry.” I slowly take a bite of my spicy tuna roll sushi. It’s not the best, but it will do.

Abby looks up from her plate. “Me too. Ugh! It feels like every time we are getting somewhere, something gets in the way. Did you know that someone is optioning for the house I showed you today?”

Abby nods. “If we don’t claim it soon, they will. We need seven members at the minimum for our sorority and money for the renovations. If not…” Abby looks back at her plate. “And with us being forbidden at the Gala and other Greek events, I don’t know how we are going to do that.” 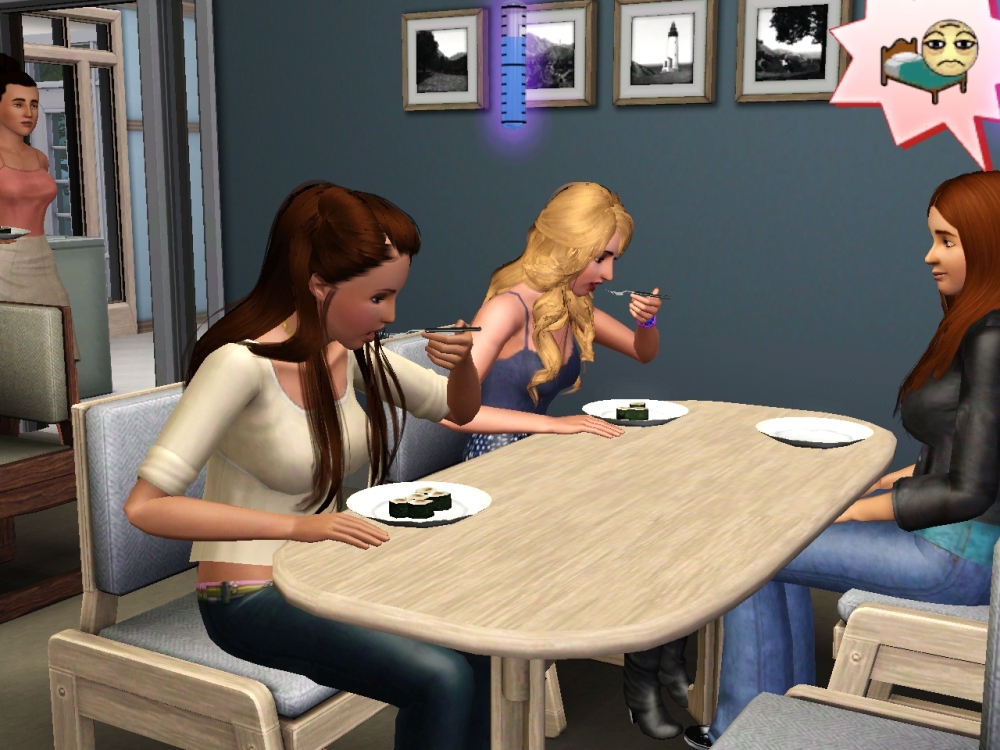 “Hey guys.” I look up and see Janice slipping beside Abby. “What’s new?”

“The Beta Gamma Kappas ending before they began,” Abby says, with another bite of sushi.

Abby shrugs. “Just forget it.” She then rises from her seat. 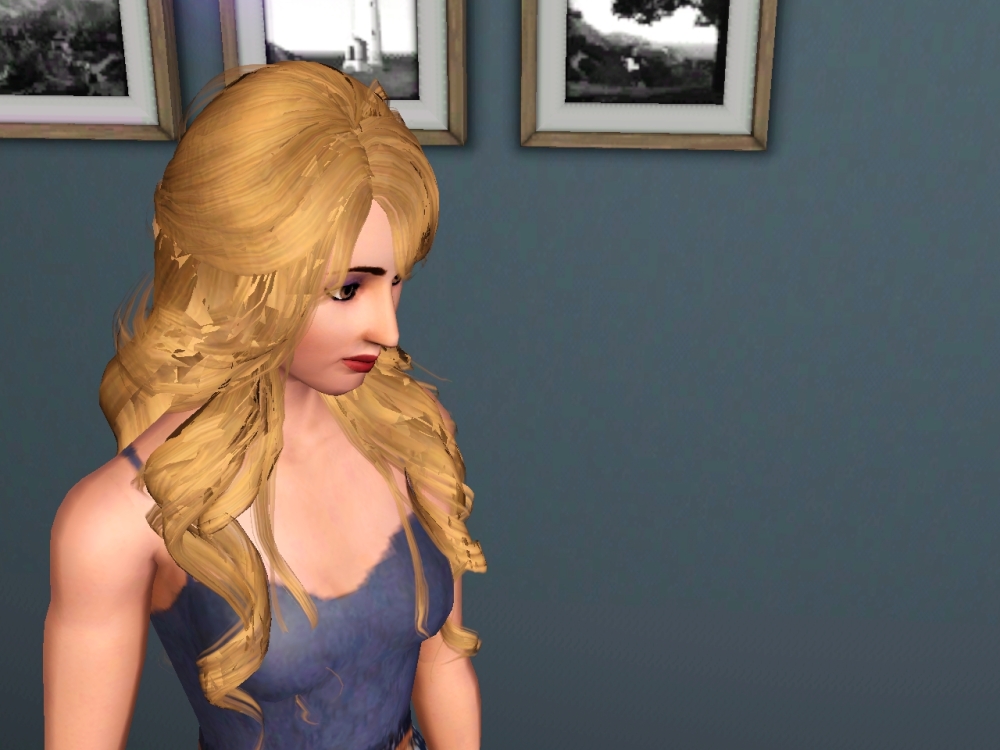 Janice arches her brow. “You do mean sleep, right?”

Abby shrugs. “Yah, whatever.” She then turns and walks away.

Janice looks after her and then to me. “What’s going on with her?” 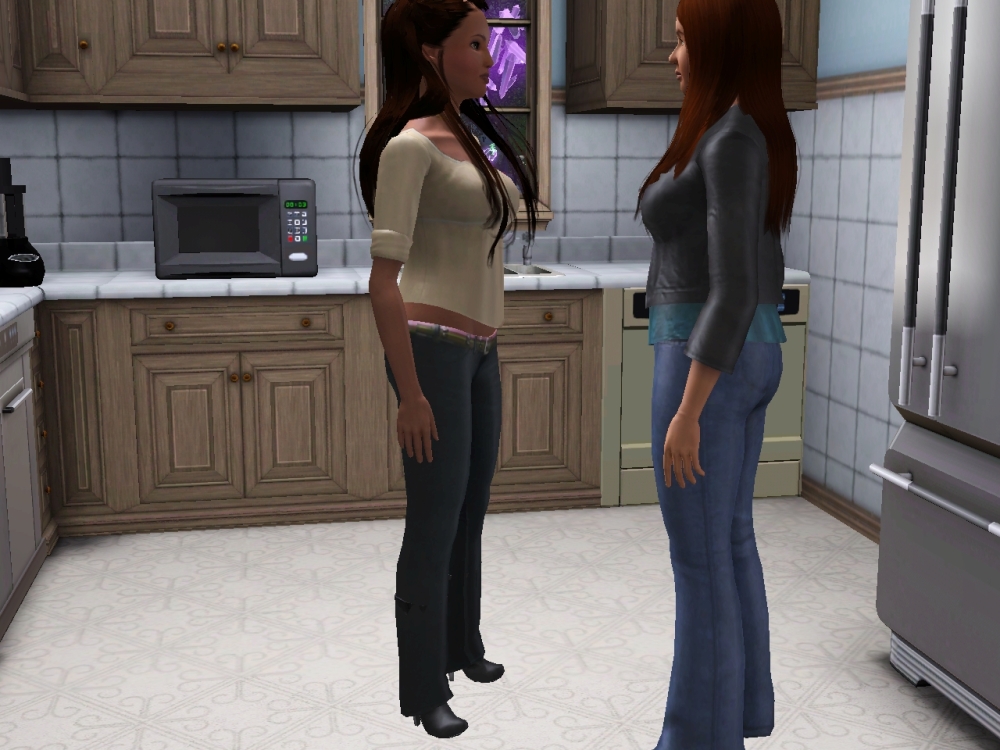 We then finish our dinner in silence and then head back to the dorm. When we get there, I head into the kitchen to get a bottled water. Janice follows me and then pulls me aside.

“Are you seriously not going to tell me what’s up with Abby?” 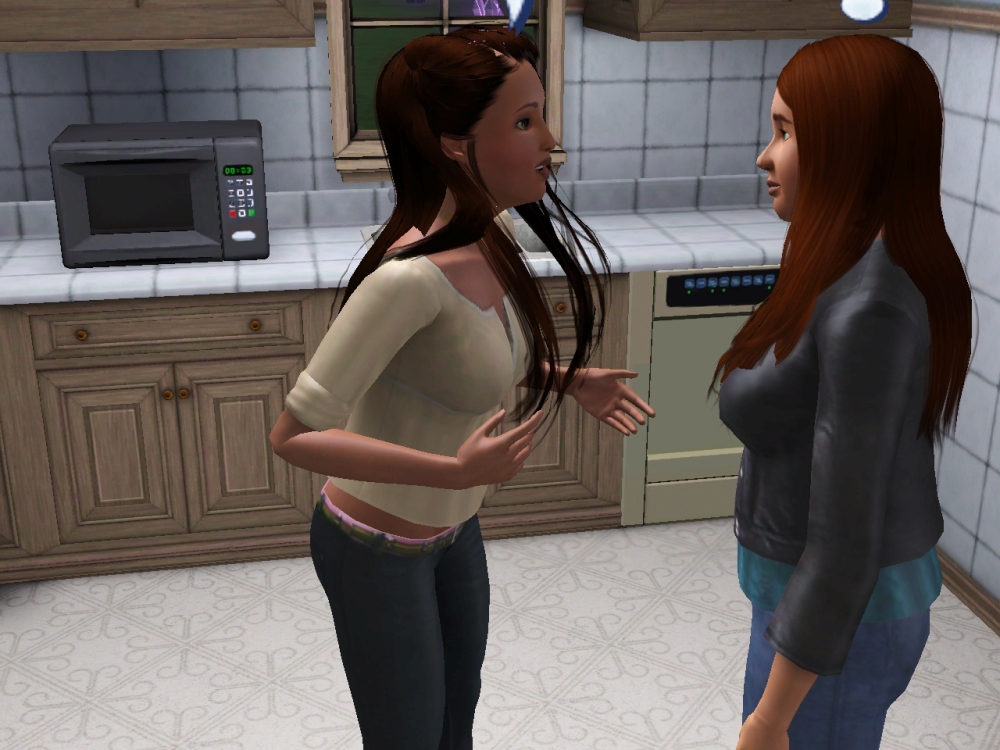 “Geez! How did they even know we were going to do that?”

I shake my head. “I don’t know, but I’m guessing that it was one of the other sororities that outed us.”

“And I bet I know who. What one sorority seems to be so against Abby succeeding?”

My eyes widen. “The Alpha Beta Phis.” I scoff. “You know, for people who claim that Abby will fail, they seem to be taking a lot of precautions to stop her from getting anywhere.”

“Tell me about it.” Janice then lights up. “You know, I have an idea!” 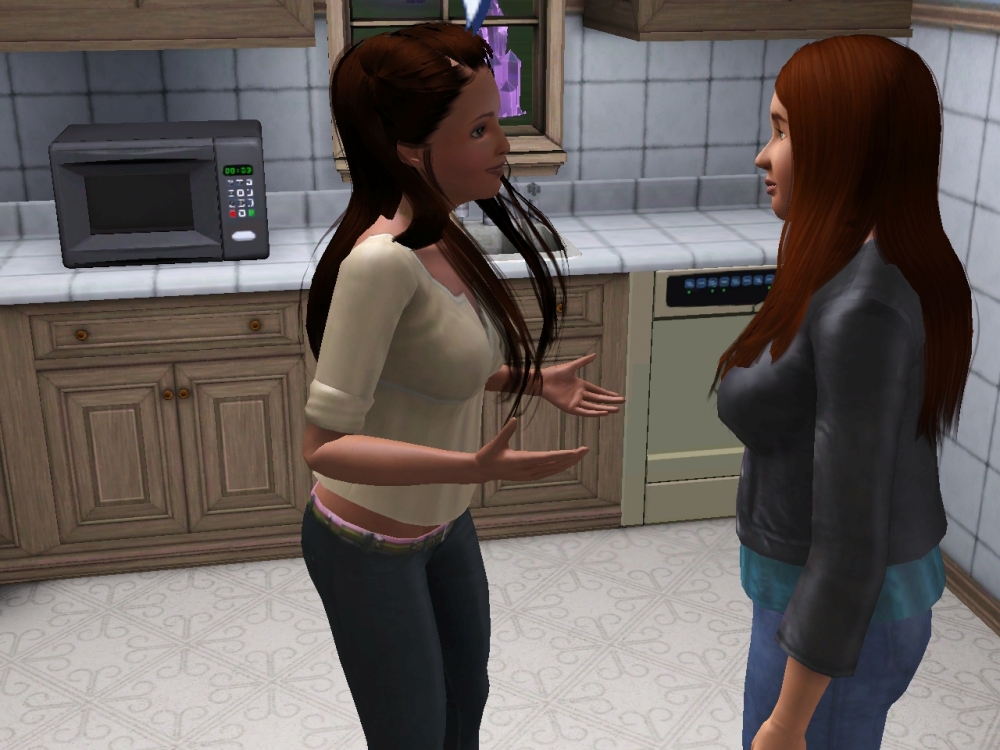 “If the Greek council doesn’t want us at their events, why don’t we throw our own! With Christmas coming, we could throw a bazaar, or an auction or something.”

“That sounds intriguing, but what would we be auctioning? We don’t exactly have worthy things for an auction.”

“Well, we could have people donate things and best of all, I was thinking we could auction off something of Abby’s. Something that will really show her talent and maybe even interest some people in her sorority.” 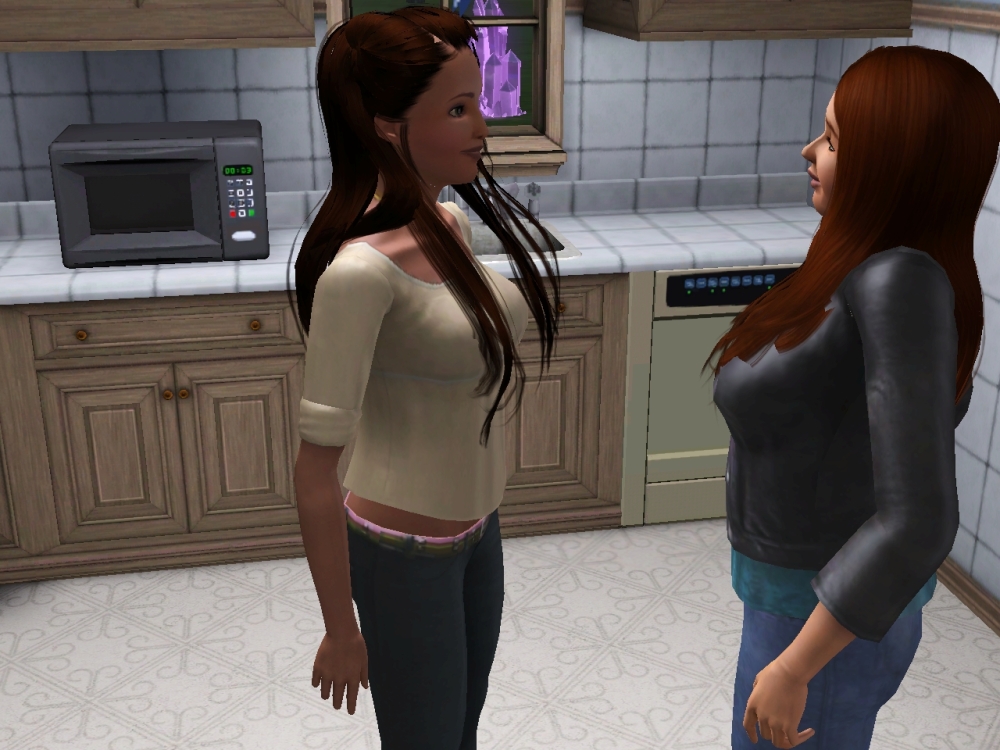 I raise my eyebrows. “You want to auction off Abby’s paintings?”

“Yes! Trust me, they are that good! People would pay big money to have one! I know she has a lot of paintings she hasn’t really figured out what to do with. We can auction those off to people. We don’t have to limit the bazaar to only potential sorority members or students. We can invite teachers and faculty. The more the better.”

I blink at her. “You are really into this.”

Janice smiles. “Anything to keep me distracted.”

I then remember Janice’s breakup with Greg. By the hurtful look on her face, he clearly hadn’t come around to talking things over with her yet.

Janice looks down and shrugs. “It is what it is. I’d rather not think about it. Besides,” she looks up and grins. “We have a Christmas Bazaar to plan!”

I smile back. “It does sound fun. And just to make it more exciting, let’s not tell Abby. It will be a surprise.” 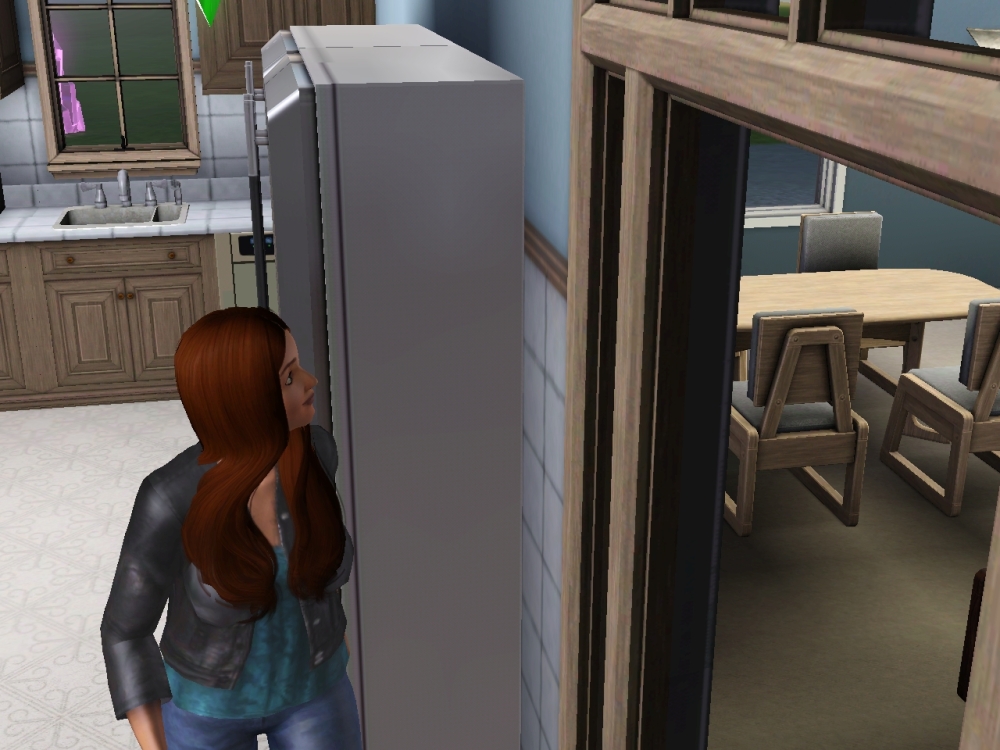 I then stretch and glance at the clock on the kitchen wall. It is Seven o’ clock.

“Well, I should head up. I want to see if I can finish up the last bit of the guidebook before I go to bed.”

I shrug. “Hey, I’m a writer. And a fast typer.” I then say goodnight to Janice and head through the doorway back to the staircase. As strange as it was, I was feeling a bit of determination running through me. If the Alpha Beta Phis thought they were going to stop us from trying, they had another thing coming.

I'm a 28 year old girl with dreams of being an author. I'm a very friendly, and sweet person, always thinking of everyone before myself. I can be very lively and outgoing, but also quiet and cautious. I like to over-analyze things just to make sure I have reached every possible outcome of how things will turn out. I started writing when I was about thirteen. It happened one day when I was sitting at my kitchen table drawing a picture, then suddenly a story just played out in my head. I started writing it and a year later, a short novel was written. I've been writing ever since. I usually get ideas from anywhere. I could be sitting in my room, in a car, at a park, or in class (that's where I use to get most of my ideas) and ideas will just come to me. At the moment, I have graduated from college with an emphasis in Creative Writing and Literary Studies. I am hoping to become a wonderful author and maybe even do some screenwriting someday. It may seem impossible, but it doesn't hurt to believe in yourself and work hard to make your dreams a reality! :) View all posts by evanglina24